It was another incredible performance for the Deceuninck Quickstep team over the weekend as Frenchman Julian Alaphilippe took another spring classic win making it four wins from four races! Strade Bianche is fast becoming regarded as the sixth monument and its easy to see why!

Last years’ race will live long in the memory of all those who watched it. The horrific weather conditions dominated the day and saw the riders cover from head to toe in the chalky white Tuscan mud. It was a real test of grit and determination that only the very best would survive. Only 53 of the very toughest riders in the sport managed to even finish the race with many pulling out purely because of the torrid weather conditions. Who can forget the images of Wout Van Aert cramping in both legs on the very last climb to the Piazza del Campo, yet still finding the strength to haul himself across the line securing a 3rd place finish!

In complete contrast, the 2019 edition was far drier and hotter, with riders wearing full summer kit compared to the raincoats and leg warmers of the 2018 edition. However, with dust being kicked up by the 147-man peloton and their entourage of cars it was still no walk in the park. In fact, the race is fast becoming so iconic in the minds of fans across the world that there are even calls for the Italian race to become the sixth monument.

The decisive moment of the race came with just over 23km remaining, when Astana’s Jakob Fuglsang attacked out of the leading group of 16 riders taking three-time Cyclocross World Champion Wout Van Aert and Frenchman Julian Alaphilippe with him. The move was well timed and quickly found out any riders who were beginning to struggle. The trio quickly established a healthy lead over the chasing group. 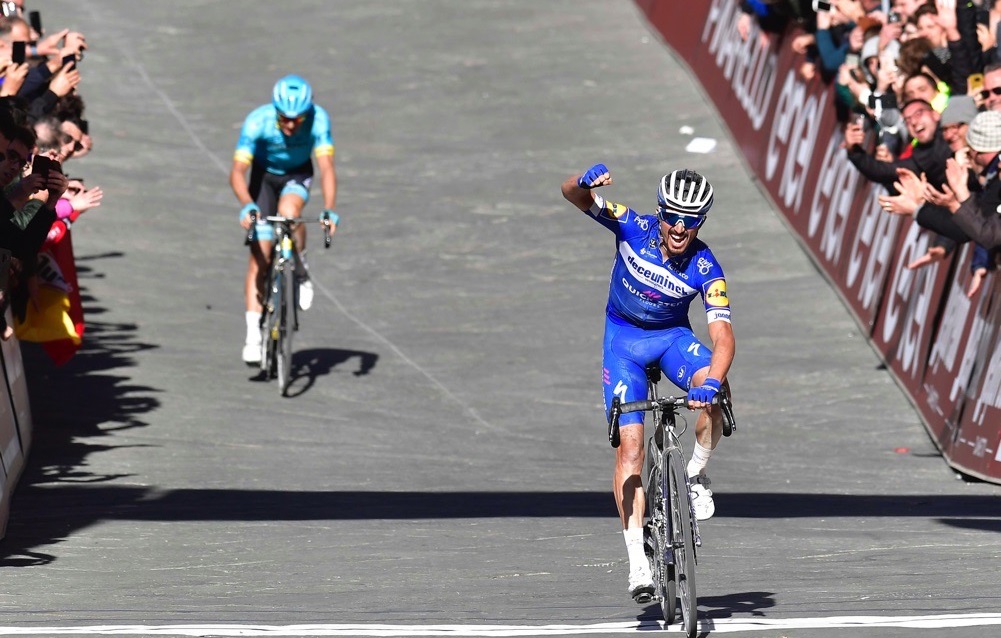 Approaching the final climb to Piazza del Campo the three riders were still all together. However, it was clear that Van Aert was beginning to struggle having previously been dropped by his breakaway companions. As the climb approached the steeper slopes of the climb it was Fuglsang who was first to try his hand, Alaphilippe was quick to follow but as predicted Van Aert was unable to follow, having used his energy up to regain contact with the leading pair.

Alaphilippe was looking strong and not wanting to leave it to a sprint the Frenchman counter attacked Fuglsang. He quickly opened up a gap as the Dane faded, which left Alaphilippe clear with time to celebrate an excellent win at his first ever Strade Bianche. Fuglsang rolled in to take second place and Van Aert rounded of the podium in third place for the second year running.

Alaphilippe and the Quickstep team all use Bryton computers, whilst Jakob Fuglsang and the other Astana riders use Northwave shoes.