Green Oil UK is rider owned and run, so it comes as no surprise that as well as being very environmentally conscious, their products work and are amongst the best on the market.

Green Oil was created because nothing similar was available. Simon Nash, the company founder was riding his bike through the River Quaggy, when he noticed his chain was in the water. The oils and lube were running off into the water and it brought to his attention that all the chemicals in the products he was using on his bike were ending up in the water systems. He began looking for an alternative to a petrochemical polluting lube, but nothing was available.

This passion followed Simon to university where he spent his time developing a formula for a chain lube that contained no petrochemicals or other chemical nasties. Armed with his formula, Simon set up Green Oil, who now make the world's greenest bike maintenance range. As well as the original chain lube, the range now includes a bike cleaner, a degreaser and other award winning products. Free of petrochemicals and PTFE, they use more than 21 different plants and natural ingredients to give you the performance you deserve.

Their products and company have won awards for performance. They are not some chemical company hoping to make a quick buck in the bike industry. Nor have they ever used petrochemicals or PTFE in their products. Simon Nash, Green Oil UK's founder company owner started Green Oil in a shed in 2007. And he rides regularly, meaning a chance to try new products and prefect existing ones... 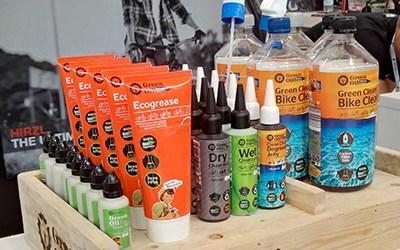